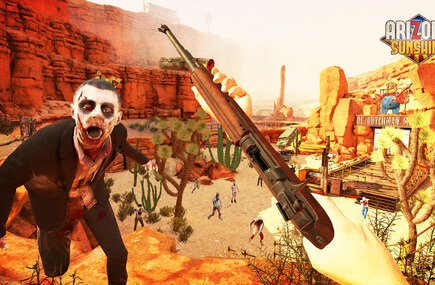 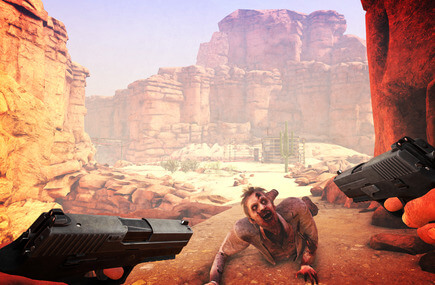 The cloudless sky of sunny Arizona, cactuses, the Grand Canyon, a shotgun in hand, and they ... Zombies, zombies, hordes of zombies. Arizona Sunshine is a first-person shooter built specifically for VR that takes you to a post-apocalyptic, zombie-dominated Southwest America. We offer a detailed overview of the game.

Description of the game "Arizona Sunshine"

Created for the HTC Vive and Oculus glasses, Arizona Sunshine immerses you in the zombie apocalypse. Use your weapons with real moves, freely explore the post-apocalyptic world, and put your survival skills to the test in VR mode - the survival game is more addictive than ever before.

In the game, we have a choice of Campaign mode and Single mission mode. The first is divided into a story mode, known from the PC version with a choice of difficulty levels, a two-handed weapon mode created specifically for the PS VR scope controller, and apocalypse mode, where we only have one life. In turn, the second mode is a typical test, when we are faced with an influx of progressive waves of enemies, and our task is to survive as long as possible with so many corpses on your account. In both cases, we can choose whether to play alone or with a companion. Please note that the campaign offers up to 2 players, while the Horde allows up to 4 people to play at the same time.

The game takes place in the state of Arizona, in particular, around the Grand Canyon of the Colorado River. We are moving towards a truly post-apocalyptic reality, in which hordes of bloodthirsty zombies roam the world, and every spark of a human voice is heard on the radio. Of course, our task is to survive in the face of aggressive opponents, which will be helped by a fairly large arsenal of weapons (mainly firearms). Interestingly, in the game, our problem is not only zombies, because during the passage we also have to deal with the scorching Arizona sun and limited supplies of ammunition and food. The walkthrough of Arizona Sunshine is truly breathtaking.

The plot is trivial. As a survivor of a zombie apocalypse, we break out of our hideout to a safer place, smashing a whole bunch of undead along the way. There were many similar games, movies, and TV shows. However, no one allowed one to enter this world and face zombies like Arizona Sunshine does thanks to PSVR glasses and a sensational goal controller.

For most of the game, we will move through a canyon and other "corridors" that, due to their size, give the impression of freedom of movement, but keep the player in a safe zone.

The classic no-ammo situation is nothing new, we've seen it in many games before, but it adds to the intensity of the game. Well, until you get the skill to accurately shoot and destroy enemies with your first shot.

The shootout is great too. Aiming is as easy as choosing a weapon, but pistols are not accurate at long ranges, so we found it better to let the zombies get close before you start shooting, which puts you in greater danger but also keeps you alive.

What do the developers offer us?

We have pistols, shotguns, rifles, snipers, grenades, and exploding red barrels scattered across the boards. Of course, we do not immediately understand everything, and as real zombie hunters, we collect more and more poppers as we play. To make the game more realistic, we have a limited amount of ammunition that we have to find in abandoned cars, houses, or special locations. As befits survival on a desert journey, you will also need to hunt for food, which will increase the level of non-renewable health. To check how much ammo we have left, we need to see where the virtual belt with cartridges and the rest of the available weapons hangs.

So, to summarize, it should be noted that Arizona Sunshine has quite excellent reviews among the players. Arizona Sunshine is an action-packed battle with hours of gameplay, and killing zombies with friends in VR is twice the fun.

The graphics and plot are well developed, which will allow you to fully immerse yourself in the post-apocalyptic world. Visit our VRATA Virtual Reality Club and start your battle for survival now!