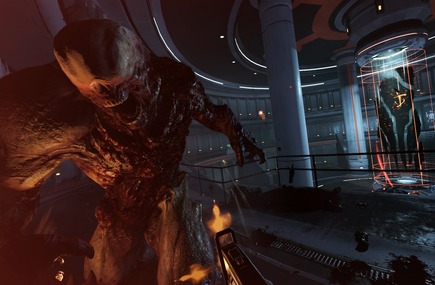 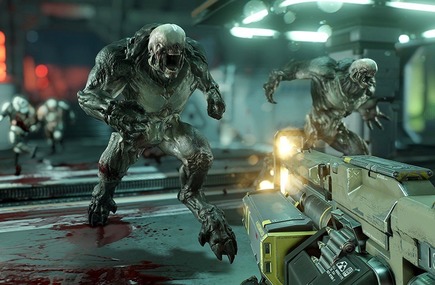 Almost 24 years ago, the games industry shocked the shooter fans with a new shooter and allowed them to fight in 3D in the first person. Even before the advent of VFR, the game was the only one that allowed you to plunge headlong into hellish reality with cool weapons in your hands. Virtual improvement completely throws you into a bloodthirsty battle against dozens of enemies.

Consider the doom VFR walkthrough. You can move using a teleportal or across. The teleportal allows you to travel to a certain point, and the crossbar allows you to jump in one of 4 directions. To see the mutant, you need to turn your head. You can also rotate 180 °. Before a full-fledged game, every gamer is given training, which is best taken seriously.

There are 3 levels of difficulty:

We warn you that this is not a game in which you will be able to relax. Already at the intermediate level, you will have to sweat great to pass at least one round.

As for weapons, there are:

If you wounded a mutant, you can finish it off and tear it to pieces, this is great gameplay. Movements take place using the map, choose a position and you are already there.

Club "Vrata", in turn, is equipped in such a way that nothing distracts from the gameplay, so it is easy to immerse yourself in another world, so you are welcome!

When you first appear in the game, you will immediately notice how well-designed the graphics are. The set designed by the developer is amazing. The action takes place on Mars, the task of every gamer is to destroy the huge monsters that inhabit the planet

It's worth noting that the new Aim controller is installed on Playstation4 platforms. He then allows you to spin around the room with a revolution of 360 °, which provides a full view of the location.

Let's do a Doom VFR ps4 review. At the beginning of the game, a monster kills you, after which you wake up in disbelief. Tasks will be given by the main character himself, after which you need to go to the goal and complete it. For the first time, you will be able to fully control the character's life and learn about everything that he plans to do. Thanks to this approach, the player merges with the life of the hero. The power supply is cut off and the hero starts looking for a combat suit.

The game begins and a direct acquaintance with all types of weapons, including grenades. The monster can attack until you rip it to pieces. No other game has such a variety of monsters.

Doom VFR reviews were the most influenced by shooting effects. Players love the flying off limbs of monsters and powerful shots that tear them apart. During the passage, it is possible to improve the characteristics of the hero and weapons. To go to some location, you need to get green access, red and yellow are not allowed. The camera allows you to move jerkily so that you don't get very sick. Monsters appear from nowhere, musical accompaniment gives drive.

You can enable smooth movement in the settings, but reviews warn that this will certainly lead to motion sickness. In any case, the developers have tried to create the most comfortable conditions for everyone.

Do not expect a long passage of each level. Some of them have only two rooms. In each of them, a crowd of monsters attacks the player, killing them, he must complete the mission and collect the keys. They are required to open subsequent levels.

With a VR headset, the path to the spectacle is open. You can play on pc and ps4 platforms. The shooter can be installed on a PC or visit a virtual reality club, which is what we advise you. Please note that the requirements for the updated version are quite high.

To install on your computer, you must provide at least:

The shooter Doom is quite interesting and allows every gamer to completely immerse themselves in the hellish atmosphere of a mutant attack. Of course, there are several flaws in it, which they promise to fix soon. If you cannot meet all the system requirements at home, we recommend visiting one of the best virtual clubs in Ukraine "Vrata".