Playing Eagle Flight, you get the feeling of being in a fairy tale about the Eagle. The narrator tells you his story in a calm voice and accompanies you on your way. Everything starts with training in flight control. 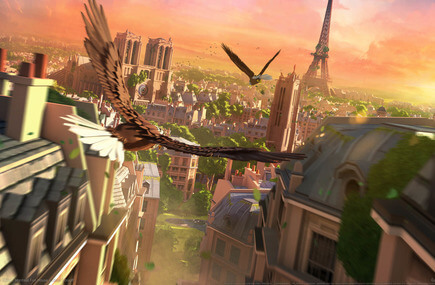 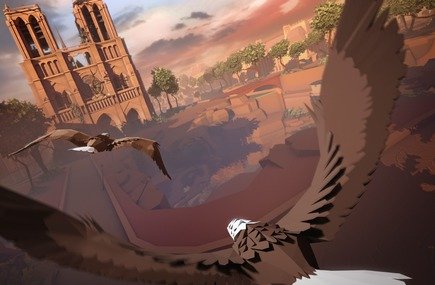 Eagle Flight VR is a game from Ubisoft released on PC, PS4, PS4 PRO and is aimed at PlayStation VR, Oculus Rift, and HTC Vive. It gives a lot of indescribable impressions. The player will have to try on the wings of an eagle, fly over the capital of France, and take part in air battles.

Eagle Flight is a bird's eye flight simulator with aerial parkour elements, during which you need to complete various missions and destroy enemies. You can dissect over the city space in the guise of an eagle or turn into an angry bird. The game takes you to the skies to experience the freedom of flight and to explore the vast expanses from unmatched heights.

Half a century ago, an unknown disaster forced people to leave their homes. The city of Paris, where the events take place, has changed beyond recognition. The capital was captured by representatives of flora and fauna.

Only the brave eagle stands against tyranny and lawlessness in war-torn Paris. To defend the territory from opponents, he will have to fly past iconic landmarks, dive into narrow streets and engage in aerial dog fights. He has to fight with animals and birds with the help of supersonic wings. Throughout the city, there are patrolling giraffes and elephants. Collisions can happen at any second. And you need to be careful, otherwise, you can fail the level by accidentally crashing into a flamingo.

Territory defense is not the only task of the game. Eagle Flight contains various single-player missions, and you will need to collect collectible trophies in the city and find secret paths. To gain an advantage in multiplayer, you will also have to build a nest at the highest point in Paris.

In a single-player game, you need to complete various missions and collect items in the city. To do this, maneuver between buildings and dive into the crevices of dilapidated houses.

In a multiplayer game, teams of winged predators will fight for hares in hats. This is a dynamic mode, in which fast flying and maneuverable eagles strike each other with acoustic charges.

It can take 4-5 hours to complete all assigned tasks.

Eagle Flight has a fantastic control system that is easy to learn. Flight navigation is carried out by turning the head, so the eagle flies to the place where the player is looking. When looking around, there are small changes in direction, and head tilt leads to large jumps and turns. The speed of response to head rotation can be adjusted in the menu.

Thanks to the intuitive controls, you will quickly learn how to maneuver in the air and defeat enemies. After just a few minutes of the game, you can easily fly between buildings and trees, performing complex stunts.

The game is easy to use and quite responsive, which allows you to complete even the most difficult levels.

The developers from Ubisoft Montreal paid special attention to the beauty of the graphics and the elaboration of the content. All the elements are carefully thought out, therefore it is possible to achieve maximum immersion. But this requires a virtual reality helmet.

To prevent the player from getting dizzy while flying, a special system has been developed. The viewable area is narrowed and the edges of the picture remain darkened. As the head moves, the area moves to reveal the part the player is looking at.

When reviewing the Eagle Flight VR game, it must be said that for stable operation the PC must have the following minimum equipment:

Eagle Flight requires a controller or PC-compatible gamepads to meet system requirements. With their help, it will be possible to slow down, accelerate, shoot and control the shield.

Eagle Flight is a well-executed action game with high-quality visuals that deserves credit for its innovation and unique approach to virtual reality. The game is one of the most ambitious projects in recent years, which was developed for VR devices.

It's so addicting that you ignore the goals and just enjoy the game. The process will bring pleasure, since you can play not only alone but also in the company of friends. If you do not have enough adrenaline, then take part in online battles, fighting with other players.

Feedback from our regular customers says that maneuvering in the air using your head, not a joystick, is cool and this allows you to immerse yourself in virtual reality deeper. High maneuverability and good visibility make the game even more exciting.

The developers took care not to get seasick during the gameplay, so Eagle Flight is also suitable for those who suffer from seasickness.

If you want to get the feeling of free flight, explore Paris and see it from an unusual angle, then come to the Vrata gaming club, choose Eagle Flight and experience the feeling of flight and the taste of victory over the enemy. You will appreciate high-quality graphics, addictive gameplay, intuitive controls.