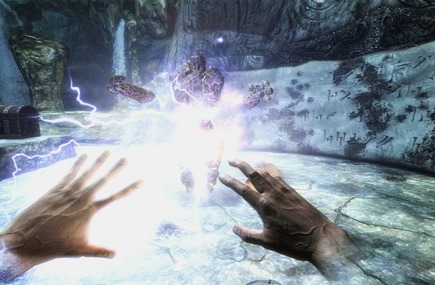 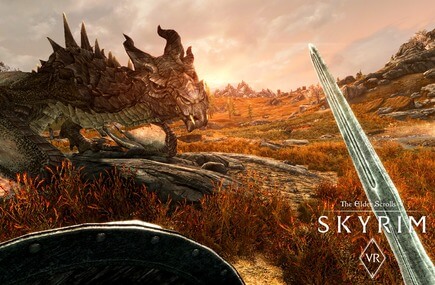 Experiencing extreme experiences in virtual reality is exactly what Skyrim fans have been waiting for. The first version of the legendary game appeared in 2011 and managed to conquer thousands of gamers around the world. Now fans of dragons and Elder Scrolls will have to appreciate the 2017 project, designed specifically for virtual reality helmets.

A detailed review of Skyrim VR will help you understand all the nuances of the new version. Unusual effects completely transform the familiar kingdom of Skyrim. The player will have to use weapons differently and move in space. To get real pleasure, it is important to get acquainted in advance with the advantages and problems of the game.

Skyrim VR controls - features and differences from the PC version

The virtual version fascinates with the complete illusion of presence. The forest and mountains seem to be real, the sudden appearance of a dragon or a giant spider gives goosebumps. All actions are realistic, as they are performed manually using the buttons on the Move controllers. This makes sword fighting and fistfighting easier, but makes archery harder.

The greatest delight in a VR game is magic. The player feels like lightning and flames burst from his hands. Moving is also used for spells.

You can move in the game in 2 ways - by ordinary movement or by teleportation along special lines. There are 2 lines - a gray one imitating a run, and a green one (sprint). Teleportation is more suitable for experienced players, as it takes a lot of stamina.

The twists and turns in Skyrim VR deserve special praise - reviews from gamers claim that turning is much more convenient than in the PC version. Everything is done with buttons, in any direction. The turns are smooth, not causing dizziness.

On the one hand, interaction with the world is simplified - all objects can be taken with a mouse. But inexperienced players sometimes do not grab objects and hang in the air. Unlike on PC, you cannot drag corpses of enemies here.

The main game line remains the same as in the classic version - the hero escapes execution turns out to be the main hope of the Kingdom of Skyrim. Only he can fulfill the saving mission - to destroy the terrible dragon.

On the way to his goal, the character wanders the world, fights, mastering magic spells. The player can try his hero's race and join guilds that require different skills. The main one is complemented by various quests with realistic effects.

The gameplay involves active immersion in the atmosphere of the world of Skyrim. The hero overcomes obstacles, uses various types of weapons and tools, moves on foot and horseback. In reality, these actions are performed with the help of real efforts - the player waves his arms, turns his head, even "jumps" on the seat, like on a horse.

The game runs on a computer or console. The best option is PS4, other consoles give a picture with poor detail. The device must meet the following criteria:

It is recommended to use Oculus HTC, Windows VR, or HTC Vive helmets in the description of the game. You will also need controllers or a gamepad to control.

It is recommended to play while standing - this gives more freedom of movement and allows better control of weapons and movement. The space around the gaming device should be as free as possible so that the player does not knock down surrounding objects. For horse riding and roleplaying, it is best to use a stool.

The settings help you adapt the game to your habits. With a weak vestibular apparatus, you need to establish a rotation binding. Avoid dizziness and Field of View filter. Special options in the settings will help you more accurately aim and sneak up on enemies in stealth mode.

Advantages and disadvantages of Skyrim VR - reviews of experienced gamers

Experts in the field of computer games call Skyrim the best project implemented in VR. Fans will find many attractive features for themselves - luxurious graphics, thrills, full immersion in a magical world. In the process of control, the player experiences an indescribable sense of freedom.

Not without drawbacks, the main of which is dizziness when moving quickly. People accustomed to virtual reality do not suffer from it, and beginners are advised to play no longer than an hour.

Another drawback is the lack of a body for the main character. Only his hands are involved in the process. Difficulties are caused by too small print on the map and menu.

But loyal fans of the game are not stopped by minor flaws. They are happy to immerse themselves in their favorite plot, which becomes even brighter and more dramatic in the VR version. Want to try? Come to our Vrata club, where great set-top boxes, comfortable helmets, and an incredible experience are waiting for you!